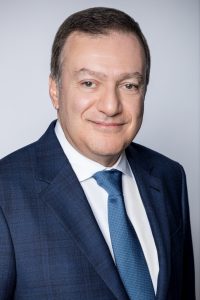 George is a serial entrepreneur and has founded and led several successful enterprises in the technology, petroleum, and telecom sectors.  George and his wife Dolly have resided in the San Francisco Bay Area since 1983.   He is the proud father of three boys, Nicolas, Rony and Patrick, and grandfather of two.  He was appointed honorary consul of Lebanon in San Francisco by presidential decree on November 12, 2019.